This game will be renamed to Era of Atlantis for publishing by me (Seajay Games)!

Age of Atlantis is a medium weight, semi-cooperative strategy game is for 3-5 players, ages 12 and up. Playing time is about 2 hours. It is intended for experienced gamers.

In Age of Atlantis you are a secret society seeking to expand the powerful nations you control. You usually have 2 of these under your control, and usually also share your power with a rival.

You also have a secondary goal trying to bring “light” or “darkness” (or neither) to the World. Working together and against your rivals you must prove to be the most powerful secret society in the World before the age of Atlantis ends either in glory or in catastrophe. 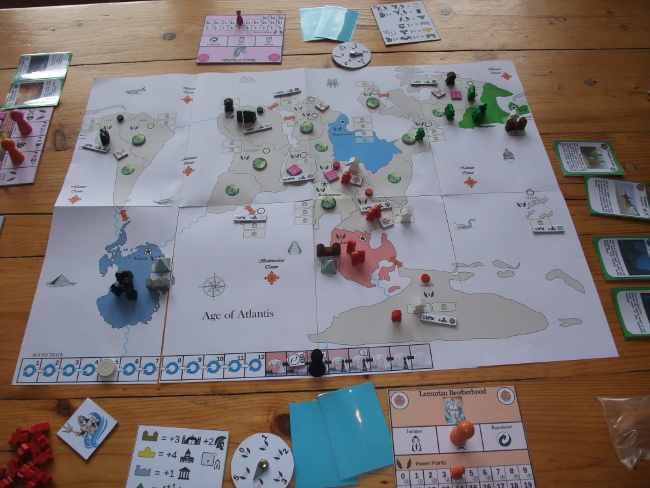 On each turn a player selects an action from one of the actions spaces available to him. This can be either an action for his secret society or for one of the two nations he controls. There are two main options to expand the power of a nation, either militarily or politically. A nation will grow more successfully the better its two controlling players can cooperate. There is also the option of switching the nations you control.

The main objective of the game is to expand the power of both of the nations you control. The dilemma is though, that you are nearly always helping one other player in whatever you do.

At game end the lesser power score of a player’s two nations counts for his final score. Additionally, a player can score points by accumulating raw power or fulfilling secret objective cards. There are only three types of objective cards, so here also you have the dilemma of helping other players with the same objective as you.