Dicess is a game where you use dice as pieces. Every game of Dicess is practically unique because the initial setup is determined by rolling all the dice. The name is a combination of the words “dice” and “chess” because the game has a remote similarity to Chess.

Play on a 8×8 square grid (Chess board). The two middle squares on the row nearest a player are marked with a star (see image below). 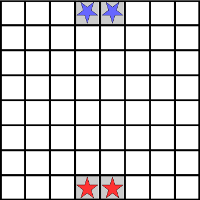 Every player has 16 dice in one color each.

Both players roll all their dice. Then the player with the lighter dice color places all his dice into his first two rows (one die per square). Then the other player does likewise.

Each turn you make a number of moves costing up to a total of 6 points (but at least 1). Moving a die to an adjacent square costs points equal to the die number. You cannot move diagonally. You may move multiple dice. You cannot move over other dice.

If you move a die from the second-last row to the last row (i.e. the one nearest your opponent) then you may change that die to any number. You must do this immediately or forfeit the opportunity.

You win by moving a die onto one of the two star squares of your opponent.

An impasse happens if in the last five rounds no die has been captured or promoted and neither player has a higher score than they did five rounds ago (i.e. there has been no net advancement of dice).