Desert Merchants is a game for 3-7 players about trading, trust and psychology. Playing time is about 60 minutes, ages 10 and up. The game is suitable as a family game and for experienced players.

Every player is a merchant on the edge of a great desert. They send each other goods using caravans which they then sell, to get as rich as possible. They need to be careful of the bandits though, which will attack and plunder the caravans.

At the end of the game the player who has the most gold coins wins.

A turn is played in the following manner:

In the first phase all players trade simultaneously with each other. If two players want to trade with each other they each place the card they want to send to the other face down on one their caravan spaces. Player may also place “damaged goods” cards.

The next phase is the event phase. Every player places one of his “event cards” face down. This may include a “bandit” card, so as to stop the caravans of other players, or a card in which nothing happens. These cards are then shuffled and revealed. Caravans that are attacked by bandits do not reach their goal and their goods are lost. If a caravan is not attacked its players may exchange the cards they placed previously. Mercenaries can protect a caravan from bandits, but they cost gold and thus reduce the profit.

In the third phase all players can again simultaneously sell their goods, buy things, and produce new goods using their production sites. Players may even build new production sites, even such that produce goods of another color. Note that the more different goods a player can sell the more he will receive per good. For two goods of a different color a player can get 3 gold. For three different goods a players gets 6 gold, and for four goods he even gets 11 gold.

At the end of the round the Sultan comes to visit the poorest player bringing a small present and protecting his oasis from the bandits with the royal guard.

After the last turn has been played players exchange all their goods for gold and get a part of the goods stolen by the bandits if they control them. 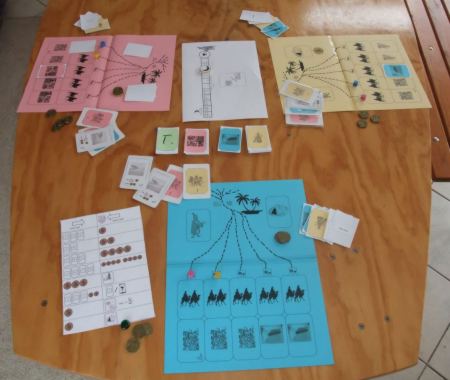 I had this idea for this game about 10 years ago. I wanted to develop a game that was like Diplomacy in which you build trust to other players. This game was supposed to be a lot faster to player though and have a more postive aspect. A player who could build good relationships was to have an advantage.

Another interesting aspect of this game is that you can hinder other player’s without revealing yourself thereby. This is because the cards you place in the event phase are shuffled, so nobody knows who placed which card.

At its core this game uses the Prisoner’s Dilemma from mathematical game theory. The players thus face the dilemma to either cooperate and make more money together or to betray each other for an advantage.