Regula is a game where the rule of how to win the game is determined during the game. Regula is Latin and means rule or law.

Play on a hexagonal board with six hexes per side (see image). 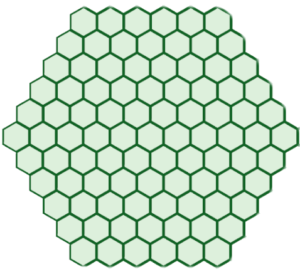 One player has white stones. The other has black stones.

Each turn after the White’s first move a player does one of the following:

The following are the winning conditions that can be proposed:

The game ends when the board is full.