“Puppetmaster Endgame” is a strategy game with a social deduction element for 3-6 players, aged 12 and up. Playing time is about 90 minutes.

The game is about the historic struggle of the free peoples of the World against the control of the secret societies. It is played on a world map. Players build up an empire or civilization by expanding in size (areas) or in depth (cities). The main idea is that there are two opposing, hidden teams in the game with different goals and a different level of cooperation.

On one side are the “Free Peoples” players who can only win or lose together. They have to figure out together what their goal is (certain items in the game) and be able to withstand the other side.

On the other side are the “Puppetmaster” players who must both the defeat the “Free Peoples” players and lastly also their team members to win the game individually. Puppetmaster players need to be aggressive and get as much power as possible.

Only the Puppetmasters know who belongs to which side at the start of the game. 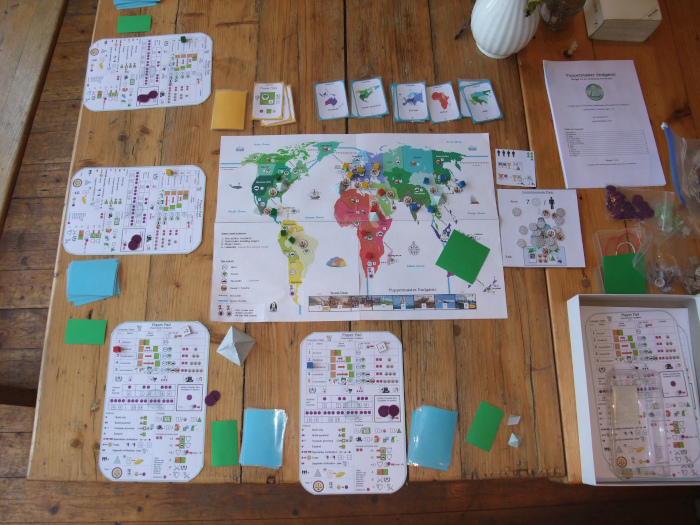 Each player starts up in a province and can then expand his civilization. He can also upgrade the technology level. At the end of each turn calamities may occur. A player gets “power points” which he can use for his actions or save his provinces from the effects of these calamities, so a player must strike a balance between these two.

It’s a tactical game with only a very small element of luck (the calamities at the end of each turn), so it becomes kind of like Chess to plan your moves.

There is also a Vassal module for the game (for online play; please contact me if you are interested in the file).